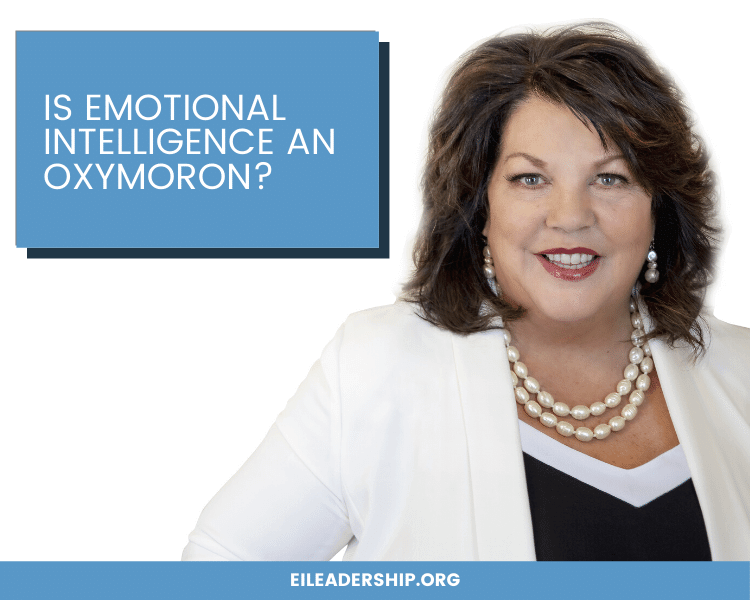 Is Emotional Intelligence an Oxymoron?

The term emotional intelligence (Ei) was first coined in the nineties and has been found to contribute to 90% of leaders' success.

Yet many leaders do not really understand what it is.

The word itself is confusion. I mean "emotional" usually means out of control, so how can it be intelligent?

The fact is, emotions are part of our nervous system, and whether we like it or not, they are hardwired. We cannot make decisions without emotional input. We cannot turn off our emotions "at work." And you really do  not want your staff to do that; this is what happens when people disengage.

Leadership that persuades people to act, works through emotions.

Self awareness, self regulation and awareness of others are the main components of Ei.

The only problem with emotions, is when you ignore them, they get stuck and show up as moods or attitude. Or worse still, they hijack you and create big problems at work and at home.

What happened the last time your emotions hijacked you and caught you off guard?

Today Apple is on the 7th upgrade to their innovative smart phone and PC is on version 10 of Windows; if our nervous system were an operating system, it has not been upgraded in over 100,000 years. We have the same triggers (amygdala) and operating system (limbic) since the stone age. This system is designed for survival.

Do you want to upgrade your “system” for greater innovation?

Today, in the age of information overload, mental fatigue is epidemic. Ei is your buffer; if you can get past the name and understand its value.

Think of emotional intelligence (Ei) as the software upgrade you need to handle the irritability and pressure from distractions, the accelerated pace of change and increased demands to do more with less.

Emotional intelligence begins with self awareness.

Ei is more than raw emotions, it is how you use these emotions to achieve your ultimate goals. You are aware of your emotions and how they impact others when expressed.

I had an accountant client who rarely showed any emotion which was normal for her. It led to mixed reactions from colleagues who were used to people smiling and sharing stories about their pets and family. I also have clients who are effusive with emotions and constantly telling people what they are feeling. In this case, she alienated people who are drained by the constant emotional flood.

While on opposite ends of the continuum for emotional expression, what both people have in common is their lack of awareness of how they are perceived by others. This is the foundation of Ei.

Strengthening your emotional intelligence does not mean you become someone you are not; the accountant does not have to become effusive. She needs to develop awareness of how others perceive her and adjust in order to get her message across. Perhaps she makes a joke, "it's all about the numbers,"  playing on her lack of emotional expression, to help warm up to the people in her workplace.

And the client who is more expressive, might make adjustments in order to be taken more seriously by those in her world.

Learning to identify your emotions and then regulate them has a powerful impact on your impact as a leader. It is also a great confidence builder!

Do you want to learn how emotional intelligence can help you perform better as a leader and enjoy greater work life satisfaction?

We use the EQi 2.0, as a measure of emotional intelligence. It is the most widely used instrument for Ei. My clients feel it is accurate and reflects them.

Based on 16 dimensions, your score is presented in a 25 page report.

This information will help you understand how you respond under pressure; are you able to make good decisions, interact with others and continue to perform optimally.

Do You Play the Martyr (or victim) at Work?

10 Things Your Team Wants You -their Leader- to Know

5 Ways to Handle the Bully Boss